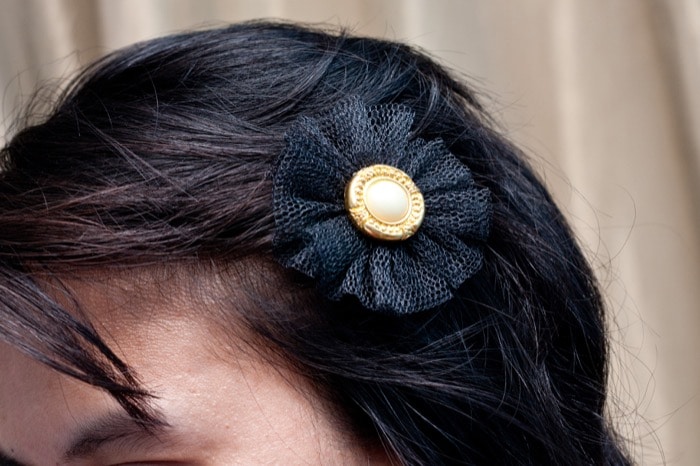 DIY Hairclips are commonly used as a hair accessory of girls, teens and ladies. They usually organize your hairstyles in a certain direction and prevent it from blocking your face. Not only are they useful but they’re also fashionable.

Today, we will be making a DIY Hairclip that can be worn during formal occasions or even at work. We will be making a formal DIY hairclip out of tulle and several simple materials. If you are a hairclip fanatic, then this tutorial is for you!

Step 2: Cut a strip from the nylon tulle that is approximately 4 to 6 centimeters in width.

Step 3: Cut at least a foot long strip from the tulle.

Step 6: On the open end of the folded tulle, run loose running stitches.

Step 7: As you reach the halfway length of the tulle strip, carefully pull the thread.

Step 8: Continue sewing the tulle strip until you reach the end.

Step 9: Sew the two ends of the tulle together using the same thread and keep on pulling the thread until the tulle forms a circle.

Step 10: Carefully adjust the spacing of the small tutu-like shape of tulle.

Step 11: Put hot glue on the bottom of the pearl button that will serve as an appliqué of the hairclip later on.

Step 12: Stick the pearl button at the center of the tulle and let it dry for a minute.

Step 13: Put some hot glue on the hairclip. Make sure to place it on the widest part of the clip.

Step 14: Stick the tutu-shaped object on the hairclip and let it dry.

Step 15: You can now use your formal tulle hairclip after drying it.

Step 16: Finally done and ready for use!

You can have different appliqué on this DIY hairclip, if you don’t have the same one used in this tutorial. You can also use a simple big button as a substitute or some plain but elegant looking beads. You can make several of these of different sizes, depending on the occasion or the event. Everything is possible and can be personalized to match your personal taste.

DIY hairclips are a fun and creative way to add some personal style to your hairstyle. From designing your own fabric patterns to experimenting with different materials, the options are endless. Not only are DIY hairclips cheaper than store-bought ones, but they also allow you to stand out and express yourself. So next time you’re looking for a new hair accessory, try making your own DIY hairclip! Who knows – you might even inspire others to try their hand at DIY hairclips too. Hope you like it! Happy crafting!