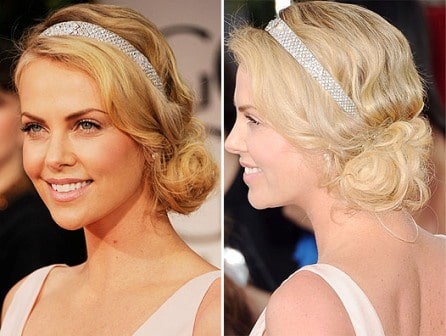 The 69th Golden Globe Awards ended up in high style, the winners and nominees went to A-list parties, hosted by HBO, Vanity Fair, InStyle. But we still have much work to do! For example, check and discuss the most fabulous hairstyles of the ceremony.

This year edition of Golden Globes featured several major beauty and hair-trends. Believe it or not, but many celebrities opted for “down” hairdos, instead of complex updos. Some of them, including Salma Hayek rocked tight curls, while others, led by Reese Witherspoon and Jessica Biel, turned to voluminous wavy hairdo.

However, the majority of stars went classic, preferring , and we have seen different kinds of them during the evening.

Low buns, usage of simple pins (with no jewelry in hair) were chosen by Angelina Jolie, Natalie Portman, Claire Danes, Kelly Osbourn and many other celebrity actresses. But enough talking, let’s check the best hairstyles of Golden Globes.